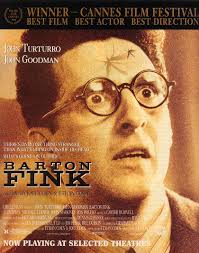 Who Bought It? Max. (Three in a row!) And yes, I realize this is out of order, but apparently we put Barton Fink on the shelf out of order when we unpacked.

Why? This is actually part of a Coen Brother’s triple-feature DVD that I bought mainly because I wanted the other two movies (Raising Arizona, Miller’s Crossing). But I do enjoy this flick and I have some pretty emotional connections to it.

Non-Buyer’s response: I was supposed to watch this movie for a homework assignment 5 years ago. I did the assignment by using the 21st century version of Cliff Notes: forums. I’m glad I can finally cross this one off my list.

Max’s Thoughts: This post is dedicated to Brian Hendricks, our film studies professor at UVic. Brian passed away not too long ago and he had an immense impact on both of our lives. It was in Brian’s class “The Writer in Film” that I first saw Barton Fink. So here’s to Brian Hendricks, the teacher who not only accepted my screenplay about a writer trying to write a screenplay based on a fictional book mentioned in Barton Fink in lieu of an essay, but who gave me an ‘A’.

I’ll get to Barton Fink in a moment, but first I’m going to paraphrase two things Brian Hendricks said that will stick with me forever.

The first one is just a truth I hold to be self-evident and the second one is a philosophy I try to live my life by. Now, onto Barton Fink. But to talk about that, let’s talk about Miller’s Crossing. That’s one of my favourite movies mob movies ever, and it’s a part of the three-fer DVD, so this is an automatic KEEP IT even if I absolutely hated Barton Fink.

But I don’t. Legend has it that Joel and Ethan Coen wrote this ode to writer’s block while suffering a crippling bout of writer’s block trying to finish Miller’s Crossing.  As a result, this is probably the world’s greatest piece of writing on writer’s block. It’s entirely self-indulgent, overly long, and mostly too slow, but for someone who identifies as a writer watching this movie, I’m like “THIS MOVIE IS ABOUT ME!”

Barton Fink is almost like a Stephen King book in that it’s about a writer, some people die and it takes place mostly in a hotel. Let’s start with Barton himself, played by John Turturro, in all of his early 90’s jittery-probably-insane glory.

Barton writes a play about fishmongers, about “the common man” and it’s a hit. So he gets hired to go to Hollywood and is immediately told to write a “wrestling picture” (which apparently used to be a thing). He meets up with W.P. Mayhew (Frasier’s dad John Mahoney playing a fictional version of William Faulkner, near as I can tell) for some help. Also there’s John Goodman as Charlie Meadows, an insurance salesman who, let me assure you, totally could tell you some stories. Really, not a lot happens that I can talk about without spoiling the ending. But when it all happens at the end, it happens SOOOO hard you guys.

In a movie about a writer trying to write some stuff.

There’s always been something about the little distractions Barton deals with trying to write – his peeling wallpaper, that damn mosquito, the noisy neighbours – that spoke to me. There’s also the point about his inability to write about anything except for that one thing. Even his wrestling picture is about fishmongers. He thinks he was put onto this earth to write about the common man, to give him a voice. But Barton does not know the common man. At least not the Barton we get to see. He sits holed up in dank rooms, being paid very fine 1940’s-money to write movies. The only people he interacts with are movie producers, hoity-toity NYC broadway types, and Charlie the Insurance Salesman (pictured above, going door-to-door).

Being this out of touch while lacking the self-awareness to realize it is the worst nightmare of Max the Writer. So this one hits home. Again: KEEP IT.

Megan’s Thoughts: I post this entry in dedication to the late, great Brian Hendricks. It was his class I was supposed to watch this movie for. He was the kind of professor we all looked for at university – a wealth of knowledge, full of inspirational phrases and no fucks to give about your physical attendance if you could mentally attend in your assignments, discussions and creations. Of the two quotes Max paraphrased, the second is how I’ve lived my life since University, well into a time when I should maybe stop saying “stuff” and have a more precise idea of what I’m making but alas, I write and film and create based on my gut, and it will forever be “stuff,” and some other people enjoy my “stuff” and that feels good. So thank-you, Brian. You made me watch a lot of weird movies.

I both enjoyed and disliked Barton Fink. I liked it, because it sparked such a discussion with Max and I that I started to forget what the movie was “about” in the most basic sense of plot. I was lost in the metaphors and imagery and what it all MEANS, man. While Max believes the hotel represents Fink as a person, I believe it represents his mind. And the shoes outside all the hotel doors represent all the ideas Fink is not allowed to access while he is contracted to write this “wrestling picture” but still exist and live. We only ever see inside one room, his room, and the rest of the ideas are locked away. They’re active, as Fink’s subconscious (Chet, the bellhop, played by one of my all-time favourites: Steve Buscemi) continues to shine those shoes and fill their needs, but they are not interacted with.

I can’t talk much more about it without giving away the entire movie, so I’ll stop there on my representation rant.

But I disliked Barton Fink because oh man, at times, does it drag. I’m a Coen Brother’s fan. My mom and I quote Fargo in our common vernacular. I dressed as “The Dude” for Halloween. I almost bought cowboy boots after I saw True Grit. But I could feel the Co-Bros (you’re welcome for turning two remarkable filmmakers into a cutesie minimized word like I’m on The Hills)  sitting in that room with Fink, throwing ideas at the wall, and it felt like they just stuck a lot of ideas in one place. And while I’m all for an artistic shot to set the mood, I laughed out loud when we cut to waves crashing on a rock.

This seemed so out of place in a movie about writer’s block.

It seemed so ridiculous. I agree with Max that it is entirely self-indulgent, overly long and too slow. I’m glad I watched it, but I’m not sure I’ll ever watch this again. But I can’t bring myself to discard any Co-Bros, whose films spark discussion and ideas in the Russell/Sussman house. So I suppose, twist my arm about it, I’ll keep it.